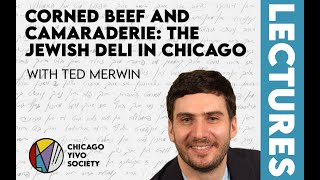 Corned Beef and Camaraderie: The Jewish Deli in Chicago – facilitated by Howard Schickler

Howard Schickler is bringing it all back home in the next program in the Random Walk through Jewish History and Culture series.

If you would like Howard to send you short histories of classic Chicago Delis and histories of Jewish Delis in America, please click here.

If you have already indicated interest in this program there is no need to request the materials again.

The presentation will last about 1 – 1/4 hours followed by reminiscing.
Corned Beef and Camaraderie: The Jewish Deli in Chicago with Ted Merwin
Few locations of Jewish life rival the delicatessen for its place in the hearts—and stomachs—of Jews in Chicagoland. Especially for those who had gravitated away from shul attendance and strict religious observance, the deli became a kind of surrogate synagogue, a home away from home where Jews of all backgrounds could nurture and sustain community over no more than a beef sandwich and a glass of chocolate or raspberry phosphate. Ted Merwin will take us from the origin of Jewish delis in Eastern Europe and their growth in New York to Chicago, following Jewish delis from Maxwell Street to Lawndale to the Gold Coast to West Rogers Park to Skokie and the northwest suburbs. His talk recovers a lost chapter of Chicago Jewish history, and considers the role that Chicago delis continue to play in the life of the city and its environs today.